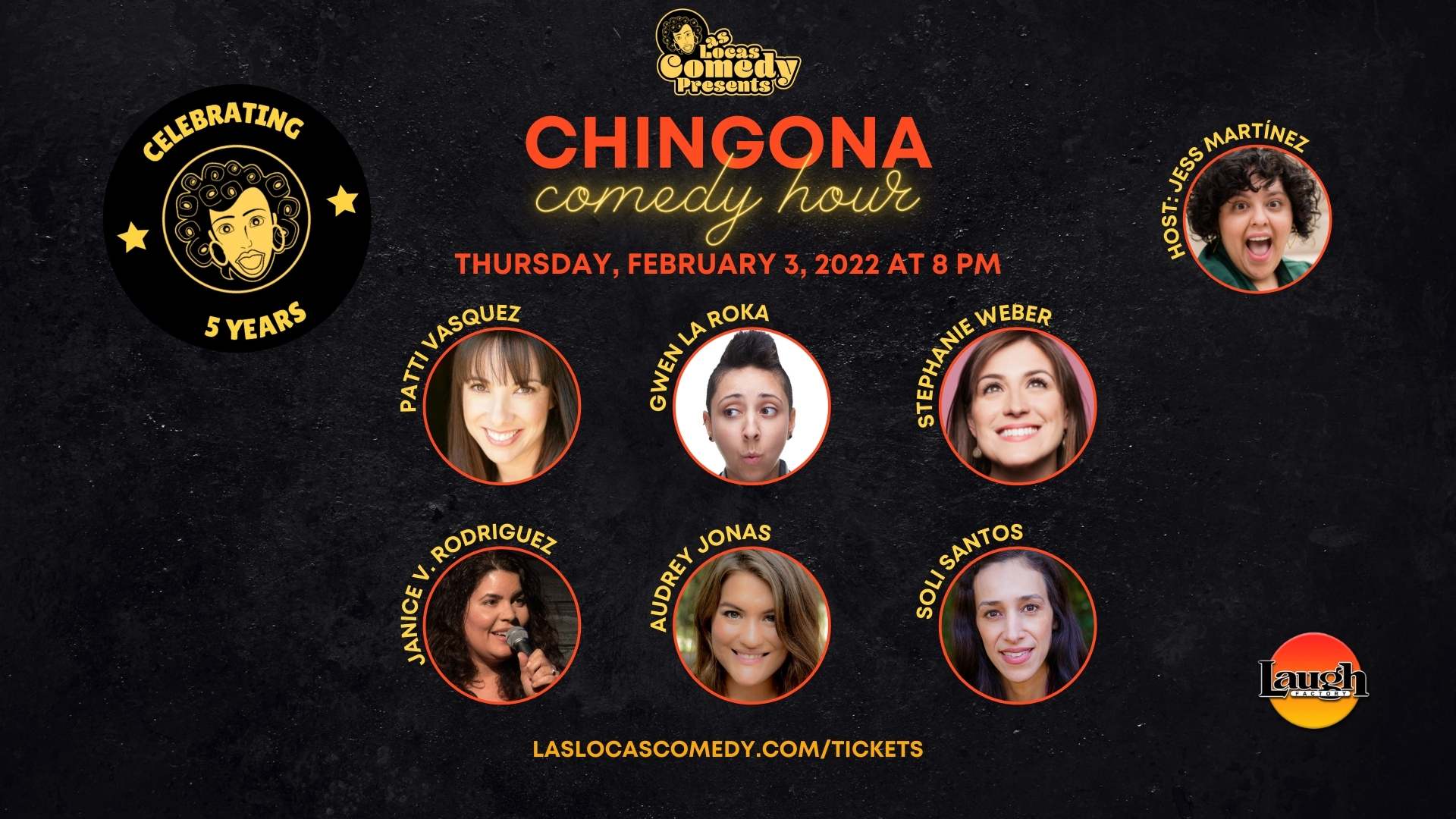 Las Locas Comedy’s fifth anniversary show at the world-famous Laugh Factory serves as a testament to the independent comedy show’s staying power as well as its commitment to elevating diverse female voices in an industry that continues to be dominated by the white male narrative.

Chicago, IL January 11th, 2022 – Chicago’s only female & Latinx focused stand up comedy show celebrates their five year anniversary at Las Locas Comedy Presents: Chingona Comedy Hour at Laugh Factory on Thursday, February 3rd, 2022 at 8 pm. Las Locas Comedy has consistently sold out it’s live shows since its inception as an independent showcase in 2017 and also thrived throughout the pandemic. In just the past two years, Las Locas Comedy was able to reach a national audience with virtual shows and digital content, was awarded “Best BIPOC Show” by Lady Laughs Comedy, landed a highly coveted spot at Laugh Factory, and doubled the size of their in-person audience from 60 to over 130.

The show also has a lot to look forward to in 2022 and will continue to adapt during these uncertain times. Rodriguez and assistant producer Jess Martínez have plans to expand Las Locas Comedy programs to include co-ed storytelling, bilingual comedy, and nation-wide in-person performances.

In an industry where Latinas represent less than 1% of comics booked at comedy clubs across the country (The Comedy Club Database) and where the lifespan of an independent comedy show can be as short as one month, Las Locas Comedy has established itself as the primary platform for locas and “honorary locas” (other women and women of color in comedy). With their new show location at Laugh Factory, Las Locas Comedy is celebrating all the chingonas in our lives. Chingona, a Mexican slang term once used against women thought to be difficult trouble makers or unladylike, is now a modern feminist battle cry among women carving their own paths without regard for those whose feathers may get ruffled along the way.

Las Locas Comedy believes a unified front in the fight for representation creates a ripple effect in the comedy scene, propelling underrepresented talent to national comedy clubs and beyond. “In this political climate and with the specific issues facing the Latinx community today, we thought it was really important to give a voice to Latina talent as well as have a platform where we could discuss important current events and cultural issues through comedy,” said Las Locas Comedy founder and producer, Janice V. Rodriguez

Rodriguez, Martínez, and their crew of “difficult trouble makers” have proven time and again that there is a market for comedy written by and performed by Latinas. “It was so refreshing to see women of color on stage putting on a hilarious set and filling the room with such positive energy,” says one fan in a review on the group’s Facebook page. “It’s a must see show and I plan to spread the word and keep going to shows to give my support.”

Heading Back To The Region For a Night of Comedy