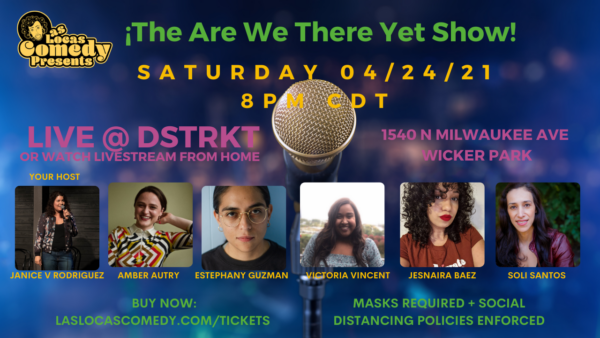 While the devastated comedy industry starts to slowly recover and comedy clubs and other venues reopen, it’s imperative that shows that thrived in the online environment not completely abandon their fans who still prefer to remain home. Comedy show producers have a unique challenge in ensuring the safety of their in-person guests and continuing to reach their loyal online audience. Las Locas Comedy is meeting that challenge with their next comedy event.

CHICAGO, IL (April 13th, 2021) – Las Locas Comedy goes back to in person comedy with a special hybrid event called Las Locas Comedy Presents: ¡The Are We There Yet Show! on Saturday, April 24th, 2021 at 8 pm CDT live at DSTRKT Bar & Grill in Wicker Park and online on YouTube Live. Las Locas Comedy is going live and in person again to celebrate seeing a bit of light at the end of the COVID-19 tunnel. In addition to providing a VIP style limited-attendance live event, the comedy show will also be livestreamed so our fans who prefer to stay home can still enjoy the show.  Attendees of the live show will have to adhere to mask requirements and tickets will be sold in tables of two or four with required social distancing. Chicago natives Jesnaira Baez and Soli Santos round out the lineup of this special night of comedy.

Founder and producer, comedian Janice V. Rodriguez, believes it is imperative to keep moving forward despite the limitations caused by the COVID-19 pandemic. “I think it is more important than ever that we’re out here making people laugh while continuing to talk about important issues. Embracing the online format has allowed us to reach more people in different areas across the U.S. and stay active in the community. As venues are starting to open up, we want to make sure we can connect with our local audience again in a safe manner. It’s important that we’re still talking to our community through comedy,” said Rodriguez. “In this political climate and with the specific issues facing the Latinx community today, we think it is important to give a voice to Latina talent as well as have a platform where we can discuss important current events and cultural issues through comedy,” Rodriguez added.

Their loyal following of “#Locas4Life” has not gone dark either so their efforts to adapt to the new normal have paid off. Their first virtual show in September drew an audience of over 60 people, comparable to sold out, in person performances. Their ticket sales have proven time and again that there is a market for comedy written by and performed by Latinas. “It was so refreshing to see women of color on stage putting on a hilarious set and filling the room with such positive energy,” says one fan in a review on the group’s Facebook page. “It’s a must see show and I plan to spread the word and keep going to shows to give my support.”

Las Locas Comedy is a Chicago-based monthly comedy showcase centered around Latinas and female comics of color. The show was founded by comedians Janice V. Rodriguez (janicevrodriguez.com) and Soli Santos in 2017 to provide a platform for Latina comedians and female comedians of color. The debut show was standing room only and their popularity continued to grow with each subsequent show. Las Locas Comedy is currently produced by Rodriguez and comedian Jess Martínez. Las Locas Comedy received the inaugural Lady Laughs Comedy Award for Best BIPOC Show, has been Chicago Reader Recommended and dubbed a “Must See Comedy Event” by Red Eye.